Diet and Health Pioneer Dies at 100 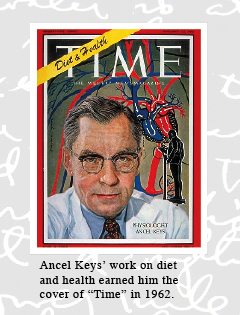 Ancel Keys, one of the giants of science at the University of Minnesota, died in November at the age of 100. Keys, a University professor of physiology from 1937 until he retired in 1972, was widely known for his pioneering research into the connection between cholesterol and heart disease.

Keys worked in a space beneath Memorial Stadium, and his Laboratory of Physiological Hygiene was the precursor to the School of Public Health’s epidemiology division. Early in World War II, the U.S. War Department asked Keys to develop a simple, compact, nutritious meal for soldiers. His creation became known as K rations—the K for “Keys.” Later, when it became clear that millions of starving people would emerge from the ruins of World War II, Keys conducted a starvation study (conscientious objectors volunteered to undergo food deprivation) to learn how best to rehabilitate starved populations. 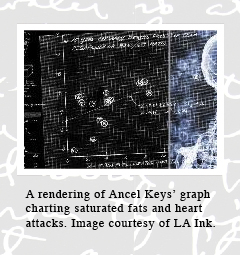 After the war, Keys studied diet and heart disease, examining populations in seven varied countries, their rates of heart attack and stroke, and diet. He was a proponent of the Mediterranean diet (low in fat and meat, high in fruits and vegetables) and co-authored the book Eat Well and Stay Well with his wife, Margaret, who survives him.

Keys was featured on the cover of Time magazine in 1961 following publication of the book.

“People should know the facts, then if they want to eat themselves to death, let them.”