By Patty Kelly, originally printed in the September-October 2005 issue of Minnesota magazine. 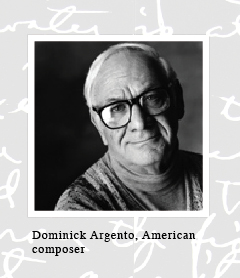 On Sundays, young Dominick Argento sat in his father's empty café in York, Pennsylvania, and taught himself to play the piano. Early in World War II, his father decided to dispense with the café's dance band, and Dominick asked to take the old upright home. Instead, on his 16th birthday, his parents gave him a brand-new baby grand. “From then on, I felt my career was doomed!” he says. “I had to be a musician.”

Sixty-three years later, Argento has enjoyed a “doomed” career of extraordinary success. He has composed song cycles, operas, orchestral compositions, ballets, and works for voice and orchestra all marked by strong melody and lyricism. He has won countless awards, including the 1975 Pulitzer Prize for Music for the song cycle From the Diary of Virginia Woolf and a 2003 Grammy Award for the song cycle Casa Guidi.

“I think that music ... began as an emotional language. For me, all music begins where speech stops.”

Argento earned his M.A. at the Peabody Conservatory in Baltimore and his Ph.D. at the Eastman School of Music in Rochester, New York. He came to Minnesota in 1958 to teach at the U (“to earn a living, actually,” he says with a laugh) and to write music. The Twin Cities gave him every kind of client he needed: a major orchestra, a chamber orchestra, an opera company, many choruses and music schools-and not much competition. 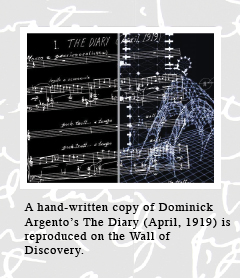 Argento's dual careers were mutually beneficial; midway through his 39-year U career, he could easily have lived on royalties and commissions but found that teaching enhanced his composing. “The greatest thing about being a teacher is that it requires one to remain open-minded,” he explains. “You have to impart to students all of the possibilities-all of the different styles that one can consider. You're constantly reexamining your own theories and attitudes. And that can be nothing but healthy. Contact with the young is very salubrious too. When you're middle-aged, it just makes you feel more alive!”

Argento is hard-pressed to say which of his accomplishments gives him the most satisfaction, but he does single out one particular pleasure. Years ago, Canada made his Six Elizabethan Songs part of the required repertoire for all music school graduates. “[Students] have to learn my work the way they have to learn Bach or Schubert,” he says. “To me, that is such an honor.”

Argento still composes every day. He's currently composing a large work for the 150th anniversary of the Harvard Glee Club.

“I work at it like a banker-all day long, I don't write to change anyone's life . . . but I'd like to enhance it. I write because it's a way of leaving calling cards here on Earth. When you're not here, at least it's a little signpost that says you were here.”