By Burl Gilyard, originally published in the May-June 2004 issue of Minnesota magazine. 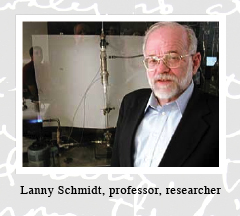 Lanny Schmidt, professor of chemical engineering and materials science at the University of Minnesota, has quietly toiled away at research projects for nearly two decades. Then suddenly this winter, he found himself amid a flurry of media attention following an article he and his colleagues published in Science magazine. He was interviewed from Canada to Australia and for numerous news organizations in between. Schmidt and fellow U researchers had hit on a new way to extract hydrogen from fossil fuels and ethanol. Ultimately, Schmidt says, the goal is to produce hydrogen from renewable energy sources.

The paradox of hydrogen is that it's the most abundant element in the world—including in water—yet it doesn't exist on its own. "'The hydrogen economy' is a buzzword phrase that's been picked up," acknowledges Schmidt, a Regents' Professor. "It doesn't mean anything because hydrogen doesn't exist in free form." Currently, hydrogen must be produced by large-scale refineries using large amounts of power. Hydrogen energy is stored in fuel cells—which convert chemical energy into electricity—that could be housed in homes or vehicles. But so far, producing hydrogen has been prohibitively expensive. 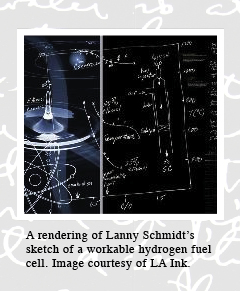 In what amounts to a small pipe, Schmidt and his colleagues have created a reactor wherein a chemical reaction converts ethanol into hydrogen without burning it. In Schmidt's model, the hydrogen wouldn't be stored, but would be used as it's produced. In theory, consumers armed with reactors like Schmidt's, about the size of a softball bat, could convert ethanol into hydrogen to provide power for their homes and the computers and appliances inside them.

This breakthrough potentially means that hydrogen energy can be produced more cheaply and easily than is currently possible. "The bottom line is we want to go to renewable energy because [in Minnesota] our fossil fuels are all imported. Minnesota spends $7 billion a year importing fossil fuel. The premise is that renewable fuels would all be made in Minnesota," says Schmidt.

"We all agree probably that we will switch someday from fossil fuels to renewable fuels. But will this happen in five years or 50? We don't know. That's where the University comes in. You need research to discover new technologies, to make these things economical and scalable."

This article copyright 2004 by Burl Gilyard, who retains ownership and copyright of the article. No reproduction or redistribution of this article is permitted without permission from the copyright holder. Burl Gilyard (B.A. '92) is a Minneapolis freelance writer.