By Tim Brady, originally published in the November-December 2005 issue of Minnesota magazine. 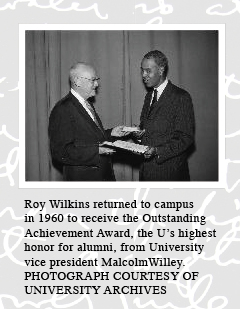 Fifty years ago this past April,University of Minnesota graduate Roy Wilkins (B.A. ’23) became the leader of the oldest, best-organized, and—to use Wilkins’s own adjective—“wiliest”civil rights group in the country: the National Association for the Advancement of Colored People. For the next 22 years,Wilkins led the NAACP through the most tumultuous and dramatic years of the civil rights movement and, in the process, became one of the best-known and most highly respected leaders of the struggle in the United States.

In a ceremony honoring Wilkins soon after his retirement, President Jimmy Carter said to him, “You have helped to write history.” And Ramsey Clark, the former U.S. Attorney General, said that Wilkins was “a man of gentleness and integrity who enriched all our lives with justice.” Upon Wilkins’s death, the Reverend Jesse Jackson called him “a man of integrity, intelligence and courage who, with his broad shoulders, bore more than his share of responsibility for our and the nation’s advancement.”

Though clearly a giant in the movement, Roy Wilkins was not universally admired. His years in office were contentious times, and the spectrum of thought within the African American community on how best to achieve political equality and social justice was wide. Militants like H. Rap Brown and Stokely Carmichael felt Wilkins and the NAACP moved far too slowly, and Wilkins, the supreme advocate of integration, viewed the Black Power Movement as pushing for a sort of reverse form of segregation.

Though they were more often allies than at odds, Wilkins and the Reverend Martin Luther King, Jr., were not the best of friends either. Wilkins was rational and cool, a man who thought the best tools available in building change were diligence, persistence, and organization. He mistrusted leaders who used their positions to rouse emotions that were quickly dissipated.

“As anyone close to Wilkins during the 22 years he led the NAACP can attest,” wrote Gilbert Jonas, a longtime colleague at that organization, “his patience with men of the cloth often wore thin. His own soft-spoken, erudite style of speaking was (perhaps deliberately) in utter contrast to the garrulous, gesticulating, rhythmic, and often fever-pitched style of Negro ministers, particularly those of the Baptist and evangelical denominations. His approach to ideas was persistently analytic, requiring evidence and proof to make a point. In his thinking, there was no room for an argument that rested on faith alone.”

In his home state of Minnesota, Wilkins’s life and times were shamefully neglected for many years. Despite his being a figure of national renown and importance, there was little attempt to claim him as a Minnesotan until late in his career.

Though he was born in Mississippi and spent the first few years of his life in St. Louis, Roy Wilkins grew up near Rice Street in St. Paul in a neighborhood “full of Swedes and Germans, French, Irish, and Jews,” according to his autobiography, Standing Fast.Wilkins was 5 years old when he came to St. Paul, along with his brother, Earl, and his sister, Armeda, to be raised by an aunt and an uncle. The death of his mother from tuberculosis prompted the move northward.

According to Wilkins, his was, for the most part, a pleasant childhood in a loving family, though not without its trials. His uncle, Sam Williams, worked for the Northern Pacific Railroad, managing the personal railroad car for the company president. The family was far from wealthy, but did not lack any of the basic necessities. Wilkins stayed close to his own “quiet neighborhood” and away from “the turf belonging to the Rice Street Gang, the toughest kids in the city,” where “the word ‘nigger’ was part of the equipment, along with other brickbats.” Despite these constraints, Wilkins would later say that it was in St. Paul that he first learned it was not impossible “for white people and black people to live next door to one another, to get along—even to love one another.”

Wilkins went to Whittier Grammar School, where he was the only African American in his class, but felt comfortable with the working class backgrounds of his fellow students. He was a fine student and was asked each year to recite the Gettysburg Address, though, he later wrote: “I see now that they picked me because I was a Negro; at the time I thought rather vainly that it was because I was the best reader in the class.”

From Whittier, Wilkins matriculated to Mechanical Arts High School, where he expressed an early interest in engineering as a career. As a junior, however, he was chosen over two white students to be editor of the school’s literary magazine, a distinction that won him a mention in The Crisis, the magazine of the NAACP, published in New York and edited by the famed W.E.B. Du Bois. This item in a national publication was enough to turn the young man’s head. By the time Wilkins graduated from Mechanical Arts as class salutatorian in 1919, his interests had shifted to journalism, and he entered the University of Minnesota intent on pursuing a career in writing.

Of his years at the University, Wilkins wrote many years after the fact that he “was not a big man on campus.” For that, you needed to live on Fraternity Row near the University, and black students were simply not allowed there. But according to an article in the St. Paul Pioneer Press (from 1970), fellow African American students in his day considered Wilkins a leader of a group that numbered between 15 and 25 students. A fellow student from St. Paul, Lafeyette Fields, is quoted as saying, “He was very influential and always willing to help. . . . [Wilkins] spearheaded a series of student-led community forums at the Hallie Q. Brown House,” a center that encouraged the young people in the community to attend college.

He also helped form a chapter of Omega Psi Phi, the first all-black fraternity at the U. When he and his frat brothers found themselves pictured in the 1923 Gopher annual, looking, according to Wilkins, “like a crew of hopeful bankers,” they had the distinction of also being the first African American organization to ever appear in the yearbook.

Wilkins broke more ground at the U. During his second year of college, he became the first black student to become a reporter for the Minnesota Daily student-run newspaper; though his “exhilaration at the breakthrough was deflated somewhat when I picked up the paper and saw that the editors had listed me on the masthead as Ray Wilkins.” Nonetheless, he worked at the newspaper through his remaining years in college and picked up another honor in the spring of 1922 when he won third place in the school’s prestigious annual Pillsbury Oratorical Contest.

For all his triumphs and accomplishments at the U, Wilkins also found here the moment he “lost my innocence on race once and for all.” It happened in the summer of 1920, when a mob in Duluth, Minnesota, lynched three African American circus workers. Any sense that Minnesota was a place peculiarly blessed by racial tolerance vanished in the brutality of that dark night.

“I was just short of nineteen the night that the bodies of [Isaac] McGhie, [Elmer] Jackson, and [Elias] Clayton swung from a light pole in Duluth,” Wilkins would write almost 60 years later. “I read the stories in the newspapers and put them down feeling sick, scared, and angry all at the same time. This was Minnesota, not Mississippi, but every Negro in the John Robinson Show had been suspect in the eyes of the police and guilty in the eyes of the mob. . . . I found myself thinking of black people as a very vulnerable us—and white people as an unpredictable, violent them.”

After his graduation from the University in 1923, Wilkins would spend just one more year in the Twin Cities, serving as editor for the longstanding local black newspaper The Appeal. When he was offered a higher paying job at a newspaper in Kansas City, he took it and moved into the wider realm of the nation’s African American community. Walter White, whom Wilkins would ultimately succeed as executive secretary of the NAACP, asked Wilkins to come work for the organization in New York in 1931. Three years later, he was named acting editor of The Crisis, succeeding Du Bois. It was the very journal that had launched Wilkins on his career in journalism, and he would stay in the post for the next 15 years.

When White died of a heart attack in March 1955, Wilkins stepped into the leadership role at the NAACP. He would see it through the next two decades of triumph, tragedy, and struggle, including the 1963 March on Washington, at which Wilkins spoke; through the assassination of Dr. King; and perhaps, most notably for the NAACP, the passage of the 1964 Civil Rights Act, the single most important piece of civil rights legislation enacted in the 20th century.

Meanwhile, Wilkins’s legacy in Minnesota and at the University was undervalued and little acknowledged through most of his stellar career. Search in vain through local media archives during the early years of his tenure at the NAACP for stories describing the successes of this son of Minnesota. Even when Wilkins was at the height of his influence and fame, a leading figure in the fight for passage of the Civil Rights Act, he came back to the campus with a stunning lack of recognition.

In February 1964, Wilkins arrived at Northrop Auditorium to debate the merits of the act with James J. Kilpatrick, who would go on to fame in the 1970s as one of the Point-Counterpoint debaters on 60 Minutes. The next day’s coverage of the event in both the Minnesota Daily and the Minneapolis Star fails to even mention the fact that Wilkins was a proud Minnesotan and a graduate of the state’s university.

In time, there would be some rectification for oversights like these. In the 1970s, Wilkins was awarded an honorary degree from the University of Minnesota Graduate School. Three years after his death in 1981, the city of St. Paul named the auditorium adjoining its Civic Center (now the Xcel Energy Center) in Roy Wilkins’s honor. In 1992, the University endowed a $2 million chair and the Center for Human Relations and Social Justice at the Humphrey Institute in Wilkins’s name. And in 1996, the U built Wilkins Hall, a student residence, on the East Bank campus.

Wilkins’s peerless work in the struggle for civil rights deserves as much and more.