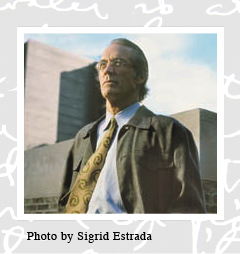 Even before September 11, 2001, William Pedersen (B.Arch. '61), designer of some of the world’s most elegant and distinctive tall buildings, was thinking in new ways about the structures. “Tall buildings have the possibility of becoming power plants in themselves; the technology exists to generate wind and solar power to fuel a very large percentage of their needs,” he says. “What happened September 11 throws into sharp relief the importance of finding ways to conserve energy in this country. We’re extraordinarily vulnerable because of our dependence on imported oil. To my mind it is really a national emergency.” Buildings can be made safer by including more escape stairwells and fire-proof refuge floors with access to fresh air. Pedersen says nothing can be done to make buildings withstand airplane crashes and urges research on ways to keep planes away from buildings.

The St. Paul native and architect’s son admits he came to the U to play hockey. During his sophomore year, however, his elevation to varsity bumped up against rigorous architecture “[My classes] took quite a beating that year; I was lucky I made it through,” he says. In Pedersen’s junior year, Professor Leonard Parker “became my mentor more than anybody else. He really got me fired up about architecture.”

Kohn Pedersen Fox Associates was formed in 1976 and has been winning awards ever since. Among its hundreds of projects is the Shanghai World Financial Center, which may rise as high as 1,640 feet, making it the world’s tallest building. Construction was halted during the Asian financial crisis, but recently resumed. The simple, elegant design is in response to the visual chaos of buildings now rising around the construction site, as well as the Chinese idea of a square and a circle representing Earth and sky.

“I think we’re at a point where architecture is going to change fundamentally,” Pedersen says. “The tall building, to my mind, is going to be the most important development of the 21st century.” Because tall buildings can generate power, conserve energy, and allow maximum natural light inside while leaving more space for parks and truly natural areas, “the tall building… can be transformed into something consistent with nature,” he says.