By Burl Gilyard, originally published in the July-August 2002 issue of Minnesota magazine.

An unassuming door, painted black with a number missing from its address, stands along Cedar Avenue on Minneapolis’s West Bank. Behind the door, a narrow flight of stairs covered in drab gray carpet leads to an office and what looks like a receptionist’s desk. There’s no receptionist; faint classical music greets visitors. From somewhere in the back of the office, a man answers the phone, "Rapson Architects." 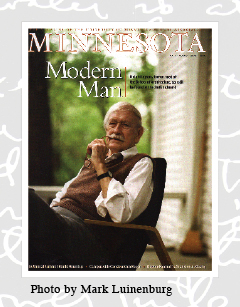 The voice belongs to Ralph Rapson, one of Minnesota’s most celebrated architects. The full name of the firm is Ralph Rapson & Associates, Inc., but these days the associates primarily consist of Rapson’s son Toby (B.A. ’94), the firm’s president, who says that he’s been working with his father on and off since he was 10 years old.

Since retiring from the University, Rapson has maintained his private architectural practice, founded in the same year that he took the post at the U. At age 87, Rapson still comes to the office every day, animated and invigorated by his profession. "One’s favorite project is usually the one you’re working on," he says.

These days Rapson is busy with preliminary design work for a project that will reconnect him with the University: plans for a shimmering glass all-season conservatory at the University of Minnesota Landscape Arboretum in Chanhassen, southwest of the Twin Cities. "Everyone that has seen it so far gets very excited," Rapson says of his sketches for the project. He seems as excited as anyone. He loves playing with design ideas and sees no reason to stop now.

"I don’t want to retire. I expect to be carried off on my drafting board," Rapson says with a chuckle. Besides, he adds, "For me, architecture is not work."

Sitting in a small conference area of his office in front of a wall heavy with awards and citations, Rapson still carries a professorial, avuncular air. His tortoise shell–framed bifocals hang from a lanyard around his neck and his bushy white moustache dances as he speaks.

He doesn’t long for the days of wrestling with collegiate politics and budgets, but does feel a touch nostalgic about his students. "I think what you miss is the constant day-in and day-out association with young people," he reflects. "Their constant kind of probing and digging and their development as architecture students was always the great fun of teaching."

Rapson graduated from the University of Michigan, in his native state, and later studied at the prestigious Cranbrook Academy of Art, also in Michigan. In the late ’40s and early ’50s, he taught as an associate professor of architecture at the Massachusetts Institute of Technology and began forging his own design reputation with U.S. embassy projects in Stockholm and Copenhagen.

In 1954 he accepted the offer to head the University’s School of Architecture. Asked if he ever envisioned leading the school for the next three decades, Rapson shrugs: "I gave up long ago trying to plan my life too far in advance. I’m a Midwest product. Coming to Minnesota back from the East wasn’t that much of a jerk for me." While at MIT, Rapson recalls, many of his finest pupils came from the heartland: "One of the reasons I came here was some of the best students we had were from the Midwest."

Upon his arrival, Rapson began recruiting the area’s top professional architects to serve as adjunct faculty. "I tried to balance pure academic educators with practitioners," he says. "I’ve always felt that it was far more proper to teach if one is involved in the reality of architecture."

Leonard Parker (B.S. ’48) had been a student of Rapson’s at MIT. "Best critic I ever had," Parker says of Rapson. "He’s extraordinarily patient with sometimes pretty stupid students like me. He never patronized students; he treated them as if they were full-blown professionals."

Parker, chairman of the Leonard Parker Associates of Minneapolis, was also a longtime member of Rapson’s faculty. "During his tenure, we were consistently ranked in the top five schools in the country," notes Parker. "It has a lot to do with both the programs he established and the fact that he hired staff who were the best architects in the area."

Today, Rapson’s educational legacy continues. After he retired, friends and colleagues donated money to fund what became the Ralph Rapson Traveling Fellowship, a competition open to University of Minnesota architectural graduates and local architects 40 years old and younger. "It offers young people an opportunity to travel and study," says Rapson. "This gives them a chance to expand." 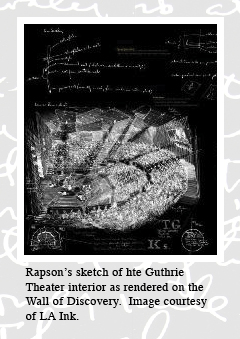 This spring, the University announced plans for a permanent homage to Rapson’s tenure. The Board of Regents approved renaming the existing architecture building and its new addition as Ralph Rapson Hall. The dedication is slated for October 5.

"I don’t think I can really express my gratitude. I’m certainly deeply honored and deeply moved by it all," Rapson says. "In a sense I represented many other people who made great contributions to the school: students and faculty and staff. So in a sense I’d like to accept it in their name as well."

Rapson chose Minnesota over colleges in smaller towns in part because the Minneapolis–St. Paul area afforded a chance to build his own architectural practice, and indeed, he became a celebrated modernist designer of local homes, churches, and other buildings. But his crowning achievement was the Tyrone Guthrie Theatre, as it was originally known. Rapson’s vision won numerous awards and was hailed for its innovative yet intimate design. A framed elevation sketch of the Guthrie, circa 1960, hangs on the wall behind him.

But less than 40 years after it opened and after several renovations, Rapson’s most admired building is marked for demolition. The Guthrie Theater plans to relocate along the riverfront in downtown Minneapolis, and Walker Art Center, the landlord of the building, wants to raze the theater to accommodate its own expansion plans. In the fall of 2001, Rapson found himself at Minneapolis City Hall to voice his objections. Originally, he thought that he should stay out of the fray, but as he watched the process unfold, he became increasingly frustrated.

"I’m very disturbed and disappointed that an organization such as the Walker, which obviously has been a great force in the art world, would be so negative about what really is a very significant building," says Rapson. "It’s disappointing to me that an arts institution would be so disrespectful."

The man who now holds Rapson’s old job, Tom Fisher, dean of the College of Architecture and Landscape Architecture, notes that despite Rapson’s unimpeachable reputation, "We haven’t necessarily treated his buildings well." Fisher hopes that the fate of the Guthrie will underscore the importance of preserving other local Rapson projects. "Maybe one of the good things to come out of all this controversy is that we are more attendant to the Rapson work that’s still standing and will try to cultivate an appreciation and respect for those projects," says Fisher.

In November 2001, the Minneapolis City Council voted to grant a demolition permit to the Walker. In March, the State Historic Preservation Office announced its opinion that the Guthrie was eligible for nomination to the National Register of Historic Places, although the building is not yet 50 years old, the standard minimum. But that finding alone can’t protect the building from demolition, and activists at SaveTheGuthrie.org are fighting to save the theater from the wrecking ball.

Meanwhile, the Guthrie selected French architect Jean Nouvel to design its new home. Rapson says matter-of-factly, "They did not invite me to make a presentation."

Rapson’s design sensibilities have left their stamp on the University community. Over the years, he designed a number of private homes in St. Paul’s University Grove, the Rarig Center for Performing Arts (1972) on the West Bank of the Minneapolis campus, the Humanities and Fine Arts Center (1973) on the Morris campus, and (with the Stageberg Partners of Minneapolis) the U’s Aquatic Center (1988). Rapson’s office sits not far from campus on the West Bank, directly across the street from another one of his designs, Riverside Plaza, formerly called Cedar Square West.

The conservatory project for the Landscape Arboretum offers what Rapson loves: a fresh challenge. Although a part of the University, the arboretum is perhaps a secret to many who don’t stray far from campus. The 1,030-acre site stretches across the towns of Chanhassen, Chaska, and Victoria and houses public gardens and horticultural research. "We don’t get a lot of students out here," confesses Peter Olin, the arboretum’s director. Olin joined the University’s landscape architecture staff in 1974 and headed the program from 1977 to 1984, when he worked with Rapson.

"I knew he was a very creative designer," says Olin. "I think this is one of the things that keep an 87-year-old charged up. That’s what he likes to do."

Rapson modestly offers, "I guess he had some regard for my capabilities."

The arboretum launched a $65 million fund-raising campaign in 1998 to pay for several projects intended to bolster programs and attendance. As of early May, approximately $47 million had been raised, nearly all of it privately. A new learning center was dedicated last autumn, and the next project calls for a new visitors’ center, which Olin hopes will open in the fall of 2003. Armed with Rapson’s preliminary renderings, Olin expects to begin raising money by the end of this year for the conservatory, which is currently projected for completion in 2007.

The glass-enclosed conservatory will offer year-round indoor gardens. "What I’m trying to do with this is avoid the look of most greenhouses," says Rapson, pointing to a small model on the table in front of him. "This will have a great flutter and richness. It’s a great winter garden, if you will," he says. Trying to describe the concept, he suggests that it will be evocative of when the ice breaks up on the North Shore. "It was like a pile of diamonds, my early sketches," adds Rapson, who is renowned for the striking elegance and playfulness of his drawings. In May the Afton Historical Society Press published Ralph Rapson: Sketches and Drawings From Around the World, a follow-up to its lavish career retrospective, Ralph Rapson: Sixty Years of Modern Design. Of the new book, Rapson says, "It’ll be a lot of fun. So many architectural books get a little bit dull, I think."

With his eye on more travel, Rapson underwent surgery to replace his right knee last winter. While recuperating from the operation, he fell and broke the femur in the same leg in January. He spent a good chunk of the winter housebound, but nevertheless kept working on designs and sketches when he could.

Rapson may have a new book out and a building being named in his honor, but he continues to focus on his vocation and his ideas for the new conservatory. "We still have an awful lot of work to do," he says, "but I think it’s going to be quite an exciting building."

This article copyright 2002 by Burl Gilyard, who retains ownership and copyright of the article. No reproduction or redistribution of this article is permitted without permission from the copyright holder.